Parts of a whole: the elements and unity of the Nuffield Transplantation Surgery Unit. Peter Womersley, 1968

Used with the permission of Dr Richard Brook, Manchester School of Architecture.
First published in The Modernist issue 26, Spring 2018.

One of Peter Womersley’s earliest engagements with the health care profession was an appointment with an ‘occupational psychiatrist’, who ‘diagnosed a lawyer, a solicitor, or an economist’ after three days of observation of the ‘problem child’ who wanted to be an architect! Thankfully, Womersley pursued his dreams and realised a range of architecturally distinct projects from his base in Melrose in the Scottish Borders. The Nuffield Transplantation Surgery Unit was one of the first buildings designed and built specifically for the purpose.

Prior to designing the Nuffield, Womersley was also responsible for Dingleton Hospital Entrance, a small admissions unit to Herdmanflat Hospital at Haddington, near Edinburgh and a group practice surgery at Kelso in the Borders - the former, an example of Womersley’s subtractive architecture, the latter illustrating a later, additive approach. He referred to the subtractive method as ‘basically Miesian’ wherein the simple open volume, derived from the plan, is broken down by a series of other closed volumes with specific functions. The majority of Womersley’s early commissions were private houses and were designed ‘from inside out’. Their aesthetic arose from a sequential working method of plan-section-model and it was the first three-dimensional explorations that would generate the character and, ultimately, the detailing for his schemes. In the Nuffield, with his assistant Joe Blackburn, Womersley crafted a ‘strange, exotic, sculptured, ochre-coloured, fort-like concrete building’. Blackburn was formerly employed by the Scottish south-east regional hospital board, from whom Womersley received some of his commissions. 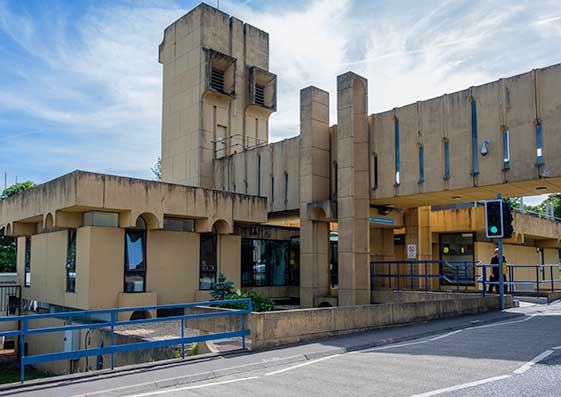 Outwardly, Nuffield appears to be additive architecture insofar as a series of discernible volumes compose the whole. The main floor was cantilevered above a basement plant room that exploited the sloping site. A separate administrative block stood apart, but was attached by the circulation core and overbridge that connected to the rest of the hospital. In fact, the highly articulated in-situ cast concrete elements were the ‘logical and accurate expression of its inner arrangement.’ At the core of the scheme were six sterile wards for six patients recovering from transplant surgery, with an obvious need to avoid bacterial infection. The sterile areas also included surgical theatres accessed via a decontamination room. The clean areas were surrounded on three sides by a ‘dirty’ corridor from where patients and surgery could be observed. Patients were kept in isolation for five to six weeks and any building element that had the potential to transmit infection was moved to the outside of the sterile envelope. Curtains, for example, could be electronically operated by the patient from within, but hung outside of their recovery room. The individual volumes are themselves quite ornate, again an external appearance informed by internal need. 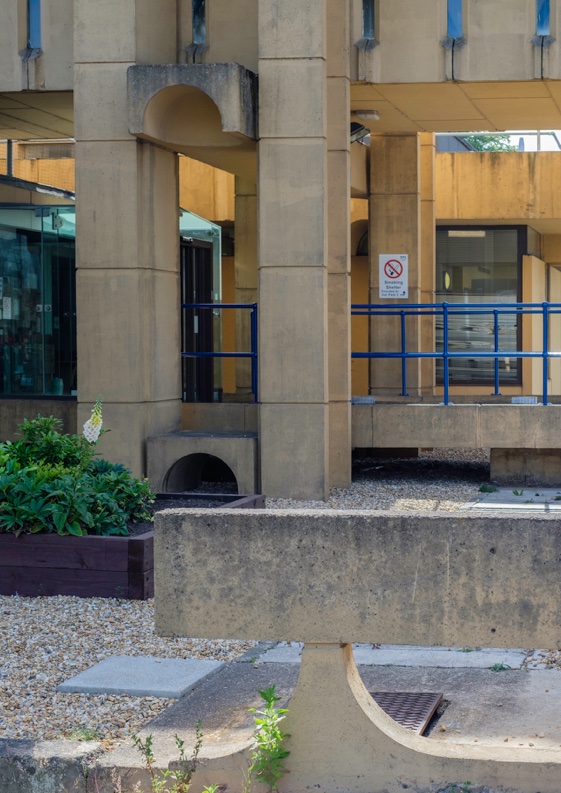 The building appeared as solid and void in equal measure and the primary materials of glass and concrete balanced one another. The solid exterior surrounded surprisingly airy interior spaces. Much of the internal detailing was carried through to the outside and the distinction between interior and exterior was minimised by the extension of surfaces, like the soffit of the entrance area. The repeated external expression of the vaulted beams was one of the most visually striking features. Their form stemmed from their dual function as structural element and as a conduit for mechanical ventilation. In Womersley’s words, ‘the multiplicity of servicing requirements was dramatised most readily in concrete’. He adopted the expressive internal radius of the beam and deployed it widely as moulded projections of the air intakes on the tower, ventilation outlets and the CCTV housing in the interior. This assemblage of elements approaches the ornate at points, but the elements are subservient to the whole that has a ‘rigourous unity’.

The smooth golden concrete that unified the scheme referred to the stone gable wall of the adjoining building. Its finish was acquired by means of fibreglass lining to the formwork. The unfinished concrete to the interior had to reflect the hygienic nature of the work contained within and the sheen and colouring was likened to travertine. The glazing, that interrupted the façade, illuminated the perimeter corridor, but also aligned directly with the patients’ glazed walls, allowing them views out, even though they were effectively quarantined. The elevation was a faithful reflection of what went on behind – glazing indicated pairs of patients’ rooms and blank walls indicated pairs of patients’ bathrooms. Womersley was of the belief that the building generated itself by virtue of his working method. He preferred to design his own ‘system’ for each individual building, which he hoped evolved its own constructional aesthetic. Certainly, the design process, as employed here, and similarly for a sports centre at Hull University, yielded its own specific, sculptural results. The structural response was the aesthetic, albeit one ‘controlled by the benevolent despot himself – the architect.’

In use as The Macmillan Day Treatment Centre