Colin McLean is an architectural photographer and is currently the chair of the Scottish Civic Trust. This article appeared in the Architectural Heritage Society of Scotland magazine recently and is used with permission.

Choose my favourite building? Hmmm. As my daughters have clearly (and mercifully) decided that volumes of the Buildings of Scotland are a better bet for their father’s Christmas than socks, I now have fourteen volumes sitting on the shelf beside my desk. I flicked through them, wondering what was my - one - favourite building. An impossible task. So I am going to choose the building that has exercised me most over recent years.

Peter Womersley (1923-93) was perhaps one of Scotland’s greatest modernist architects, though like many Scots his ability received greater recognition abroad than at home. Textile designer Bernat Klein had visited Farnley Hey in West Yorkshire, the house that Womersley had designed for his own brother, and as a result Klein asked Womersley to design him a house in the Scottish Borders. High Sunderland of 1957 remains today, on a lovely woodland hilltop site near Selkirk in the Borders. In 1972, Klein returned to Womersley, now a good family friend, to commission a design studio for his successful textile company. By then, Womersley had established his practice at nearby Gattonside, in the studio he designed, and had produced number of buildings in the Borders. Structurally, the most adventurous of these was the stadium for Gala Fairydean Football Club, an ambitious angular structure in deceptively slender reinforced concrete. 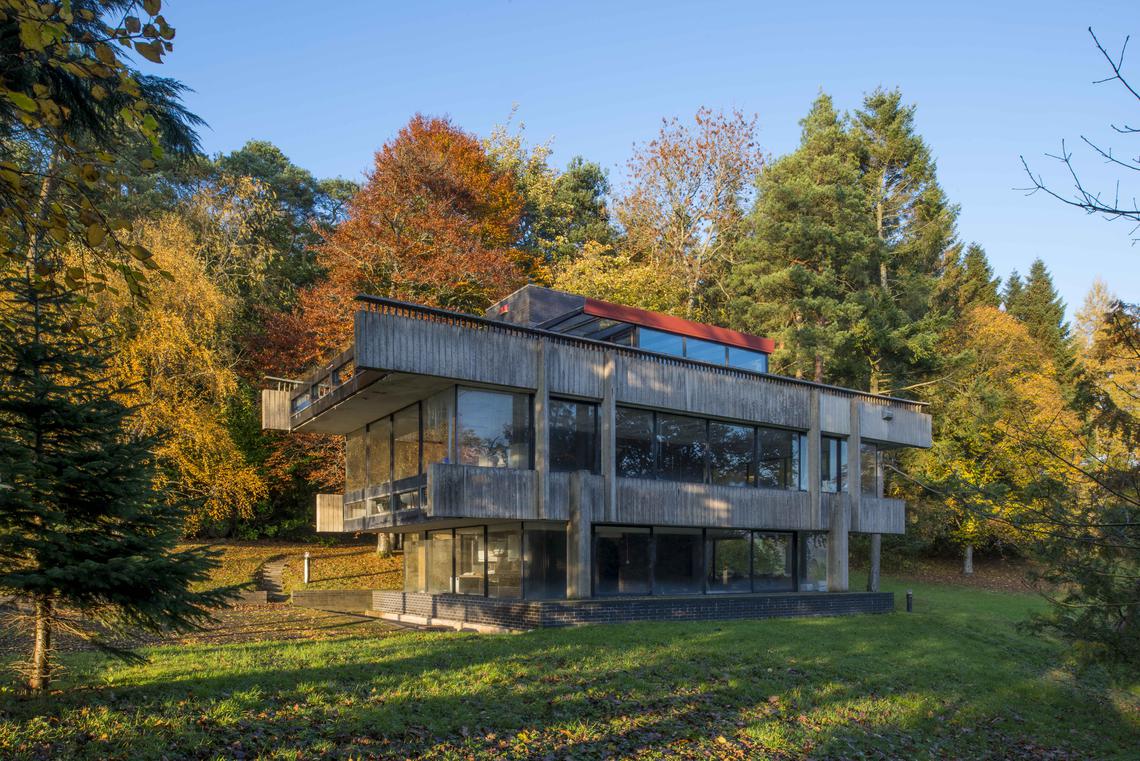 The Klein Studio sits at the roadside, just a short walking distance from High Sunderland. It uses reinforced concrete slabs and beams, but in a strictly horizontal form that cuts across the verticality of the mature trees of its surroundings - there are distinct signs of Frank Lloyd Wright’s influence. The walls are single glazed plate glass. In 1973 it won an RIBA Design Award and the Edinburgh Architectural Association Centenary Medal.

I first discovered the Klein Studio in the mid 1970s when, on a family trip to the Borders, my parents drew into the car park and we all said “Wow - what is that?” It would be fair to say that it was a moment that stimulated my interest in modern architecture. I have visited the building a number of times in recent years, and watched its ongoing sad decline.

Bernat Klein’s textile company ran into financial challenges and he was forced to sell the studio. It was purchased by Borders Enterprise and operated for a short while as a Textile Information Centre. Circa 2000 it was put on the market again and purchased by the current owner. With ambitious plans to convert it to a home, planning and listed building consents were obtained, and work commenced. Unfortunately, work had not proceeded very far when a burst pipe ran for two weeks. The new work was ruined and the project ground to a halt. And so it sits, unloved and uncared for. I had always been surprised that the acres of plate glass had not attracted vandals, but they did strike in mid 2017, and forced open the front door. As I write, the door has been repaired and so the building is at least secure. 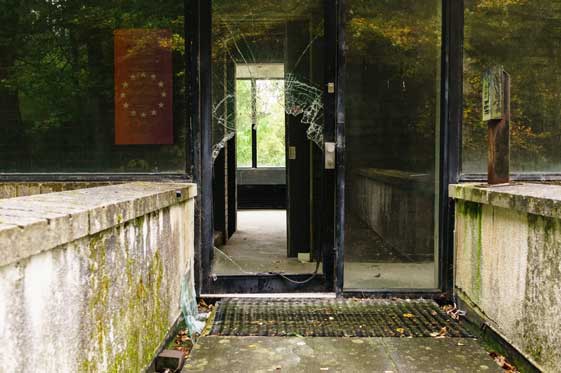 Although the A-Listed Studio has been on the Buildings At Risk Register since 2002, the statutory bodies seem to have no powers to take any action. One fears it will decline till it becomes dangerous and a Repairs or Demolition Notice is served. Demolition was the sentence for another of Womersley’s houses in the west of Scotland, whose fate was sealed by an uncaring owner and an equally uncaring planning authority. Surely there must be a better way to protect our built heritage?

Buildings at Risk Registry since 2002;
In private ownership, one owner, since ± 2000;
Severely damaged by untended burst pipe during renovation prior to 2008;
Minor work recommenced May, 2018.

Buildings At Risk Register for Scotland